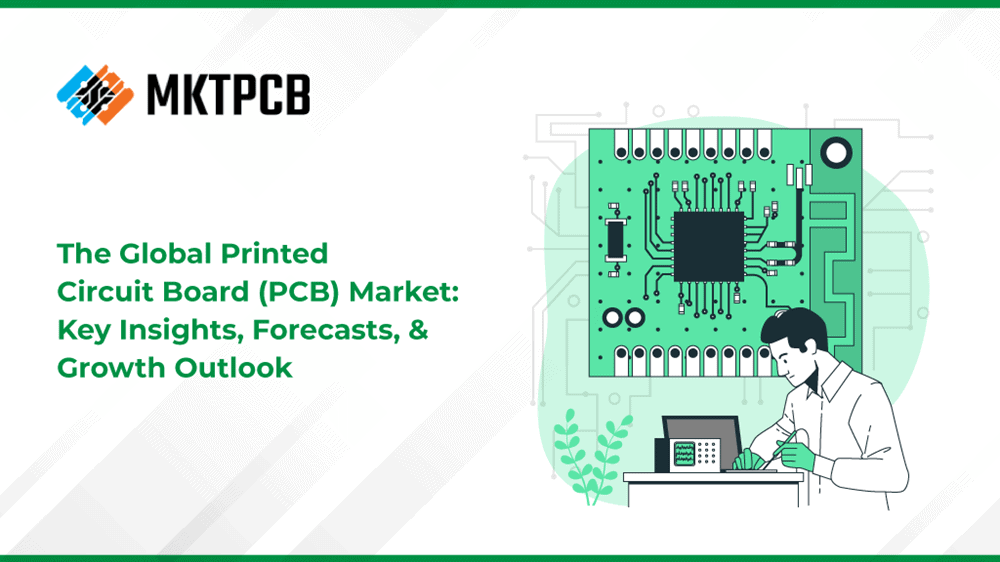 First developed in the early 20th century, PCBs technology has advanced extremely fast since then and is now at the heart of every industry, from major medical and military applications to daily wearable technology, smartphones, and what have you.

In other words, the ever-increasing industrial and consumer applications of PCBs, coupled with technological advancements such as AI and automation, have led to the rapid and continuous growth of the global PCB market.

Let’s take a numerical look at some of the latest stats and forecasts in the global PCB market, along with the latest trends and developments in this fast-growing industry.

When you take a look at the market size by PCB type:

As mentioned earlier, PCBs are indispensable in pretty much every industry you can think of. That being said, here are the top end-use industries relying heavily on PCBs:

Next, here are the top 10 suppliers in the global PCB market:

The competition among the top players is high, as they account for over a third of the global printed circuit boards industry. The major PCB cost drivers include the size of the board, its complexity in terms of components used, the number of layers, and other technical factors.

Overall, the global PCB market is in a stage of technical maturity, and in the foreseeable future, there are no real technical substitutes available.

If you consider PCB production in the Asia Pacific (APAC) region, China leads the charge, accounting for 50% of the global production in 2018, followed by Taiwan(province of China) with 12.6%, and South Korea with 11.6%.

The presence of major electronics manufacturers like Samsung, Sony, Panasonic, etc. in these countries is expected to continue driving the growth. Other emerging countries in the APAC region, in terms of PCB production, include Singapore, Thailand, and Vietnam.

In fact, around 91% of the global PCB and PCBA production is concentrated in APAC. With a shift in the manufacturing base of end-use industries to countries like China, Taiwan(province of China), South Korea, etc., this concentration is expected to increase in 2021.

And as noted earlier, the global PCB market is fragmented with the top 10 suppliers listed above account for 36% of the global market — all headquartered in the APAC region.

Latest Trends and Developments in the PCB Industry

There’s no lack of innovations in the PCB industry, with new trends and advancements happening each year on various fronts and related technologies, such as the Internet of Things (IoT).

Let’s take a look at what drives these latest trends and developments, and what’s holding back the PCB market.

Key Industry Drivers and Constraints in the PCB Industry

Here are the key developments driving the PCB industry forward:

And on the flip side, here are a couple of barriers that are hindering the industry’s progress:

Talking about major global PCB and PCBA (printed circuit board assembly) demand in terms of applications, below are the most recent happenings in the industry:

Technological advancements in product types and an expected rise in demand for substrates are going to be a key support factor for growth in the global PCBA market.

Speaking of technological advancements, here are some of the recent developments in the PCB industry.

1. Impact of IoT on PCB Manufacturers

The number of devices connected over the internet grew tremendously over the past decade. Wearable devices like smartwatches incorporate flexible sensors and chips, which requires breakthroughs in PCB designing and manufacturing technology.

Furthermore, IoT devices must have constant connectivity with their networks and other devices, especially in an industrial setting such as wastewater treatment, oil and gas exploration, and other conditions monitoring applications.

So, maintaining sufficient and consistent power levels at the PCB level is crucial for having this kind of operational capacity and network connectivity. Besides, it’s important to ensure adequate battery life in such portable devices and cost-efficiency for enterprise-grade IoT builds.

Long story short, as IoT continues to evolve, PCB design innovations are sure to follow.

In the past, design tools had isolated functional modules for Schematic Capture, PCB Layout, Signal Analysis, Thermal Analysis, and Computer-Aided Manufacturing. Today all these modules are merged onto a single platform as system-based design becomes evident.

One of the most promising technologies in PCBs, HDIs have a higher circuit density than conventional PCBs and also comprise blind and/or buried vias and often have microvias (holes with the size equal to or less than 150 microns, drilled in a PCB board and used as the interconnects between layers) of .006 or less in diameter.

With HDI PCBs, designers have several options to place one or more components on both sides of a PCB. Reduced component size and pitch enable more I/O in smaller geometries, thus allowing faster transmission of data along with a sizable reduction of signal loss and crossing delays.

With these key insights and advancements in mind, now you can better appreciate the significance of this amazing technological invention and what a great (and ever-increasing) impact it is having in our daily lives and in every industry.

Now, here is a crisp infographic that compiles these latest PCB market stats, trends, and advancements in an easily digestible way. So if you found this content useful and interesting, don’t hesitate to share the infographic below with your social network!

To embed this infographic on your website, use the code below: