PCB Annular Ring: All You Need to Know 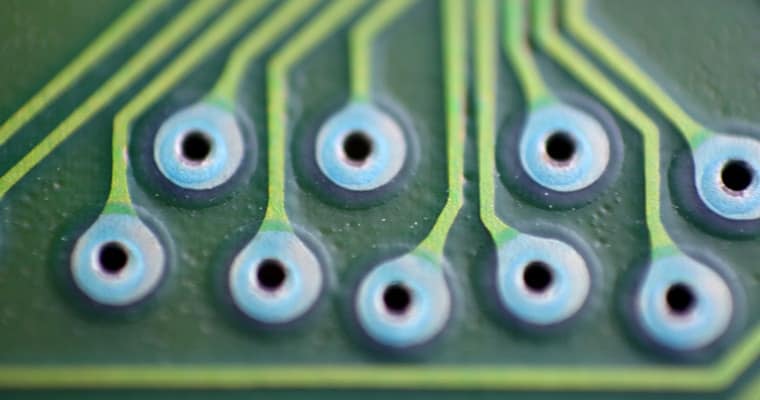 On the face of it, annular rings shouldn’t present us with any difficulties. It’s a pretty straightforward concept, and an annular ring marks something obvious. So why do they often end up being a problem when we start working on our PCB’s design? The problem occurs when we get to actually creating an annular ring because we often come across issues with tangency, breakouts, and unwanted rings.

Why is an annular ring important? How do we determine its size? When do breakouts happen? We’ll take a look at all of these issues. However, to understand annular rings, we have to understand what vias are. Let’s begin with that!

In order for a PCB to work properly, it needs to create a connection between all of its components. Additionally, these connections must not overlap, i.e., they need to work without interrupting each other. Now, if you take a single board, there’s limited space for you to work with.

At some point, it becomes unavoidable that some connections will interfere with each other. That’s something we want to avoid if we want our PCB to work the way we intend it to. When that happens, you either have to extend your PCB’s size (which is not efficient) or add another layer.

That’s why we have multi-layered PCBs, which are, in other words, several PCBs that work as a unit. However, for them to be a unit, they need to be able to achieve connections between components on different layers. That’s where a via comes in.

There are also three basic types of vias, which differ in what layers they connect. But we’ll save that for when we focus on vias. Now, it’s time to switch our attention to the thing we are here for — annular rings.

As we’ve said, to create a via, you need two copper pads. You drill a hole through these pads, thus creating a communication channel between the separate layers. An annular ring is the area of the copper pad that has stayed intact, i.e., the part of the pad that surrounds the hole you’ve made. In other words, it’s the difference in size between the pad and the drilled hole.

An annular ring is not there just for aesthetic purposes, nor is the excess copper you leave to hang around. There’s actually a function to them. The annular ring is what connects the via with copper traces on the board. Basically, your PCBs have copper traces that establish a connection between different components. A via, as we’ve said, allows you to form a connection between different layers. Without an annular ring, you would just have a hole that you haven’t connected with any other part of your PCB.

Generally speaking, the bigger the annular ring size is, the greater the copper connection around your via will be. If you’re not sure how big your annular ring should be, don’t worry! There’s a mathematical formula for it:

For example, let’s say your copper pad has a diameter of 20 mils, while your hole comes with a diameter of 8 mils. If you put those numbers in the equation, you’ll see that your annular ring should be 6 mils. Usually, minimal annular ring width is 6 mils (0.15 mm), while drill holes go between 7.8 and 248 mils (0.2–6.3 mm). Anything smaller or greater is subject to further changes.

This formula, which gives us what the ring width should be, actually represents the minimum width. The ring can be bigger than that. However, if it’s smaller, your PCB will probably have performance issues. An annular ring that’s too thin will not establish a reliable connection.

There are two main problems regarding annular rings that occur during PCB manufacturing. These issues are:

What’s that? Well, a tangency, as in maths, is when something just touches a different plane next to it. In the world of vias and annular rings, tangency means that the hole drilled through the copper pad is misplaced. Ideally, you want your hole to be right in the middle of the copper pad. When that doesn’t happen for whatever reason, the annular ring around the hole won’t be equally wide in all of its parts. If you place a hole in such a way that it’s right at the edge of the pad (AR width equals zero), that’s tangency.

Sometimes, we can misplace our hole so much so that it leaves the copper pad. Then, one part of the hole is completely outside the pad and is out in the open. In this case, when there’s no annular ring around it, we call that a breakout.

We consider both of these situations a manufacturing flaw. With a tangency, you may have difficulty attaching an electronic component to the hole. A breakout is even worse. It basically reduces the capability of the pad (and the via) and the strength of the connection it creates. As a result, you have a weakened circuit board that will have some performance issues. You need to avoid both of these issues during the manufacturing phase.

If you want your annular ring to work the way it should, you need to drill the hole right in the middle of it. However, that requires incredible precision, and it’s so easy to make a mistake. That’s why you can make an annular ring that’s bigger than the minimum one you’ve calculated with the aforementioned formula.

Teardrop annular rings got their name from their shape. Essentially, the teardrop is a fix when you misplace a hole. For example, if you misalign your drill or it moves slightly during the drilling process, you’ll have an issue with your annular ring width. As we’ve already said, this can result in a tangency or a breakout, which compromises your PCB’s performance. This is especially true for small vias and rings, where the smallest margin can create a headache. Additionally, your drill can judder during the process and create micro-cracks in the pad.

A teardrop annular ring basically enhances the integrity of the copper pad. You can fill out those cracks with a teardrop as well as extend your annular ring’s width. They make the pad stronger and more resistant to drilling stresses. However, if you have a conductor that’s bigger than 20 mils (0.5 mm), a teardrop is not necessary.

Annular rings surround a hole that we use to connect different layers of a multi-layered PCB. Basically, they are what remains of a copper pad once you drill a hole through it. The annular ring is crucial to how PCBs work. The copper that remains (i.e., the ring) is what allows the hole to connect with traces and other components. Without it, you would just have a hole that cannot transport signals.

Problems with annular rings occur during the manufacturing phase. Oftentimes, you will have a hole that you haven’t centered properly. This can result in issues with creating connections. To avoid these issues, you need to have proper machinery and experience to avoid any micro-cracks in the pad that can occur during the drilling. That’s why it’s important to work with someone like us. At MKTPCB, we’ve been making high-quality PCBs since 2006. If you want us to give you a piece of advice, or you want to get a free quote, feel free to contact us!